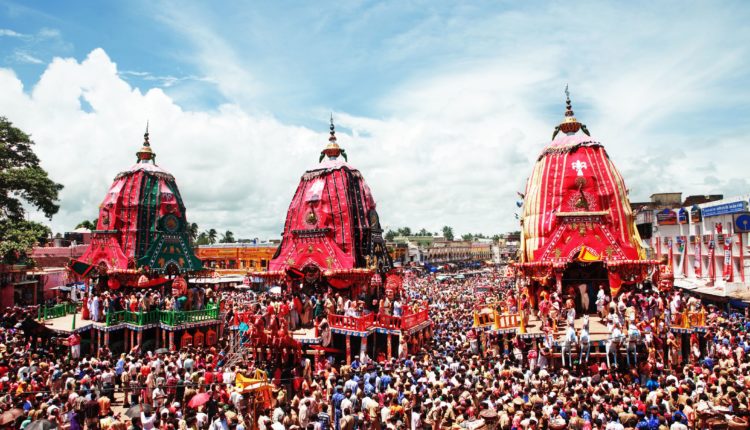 The Jagannath Ratha Yatra is one of the most important and biggest festivals of Odisha. Devotees from all around the world reach Puri, Odisha to be a part of this holy festival. Ratha Yatra is celebrated on the second day of “Shukla Pakhya” (A cycle of Moon) of “Asadha Masa” (the third month of the Odia calendar). It is the “Festival of Chariots” or often named the “Car Festival”.

The Chariots of Shri Jagannath, Shri Balabhadra, and Devi Subhadra are decorated each year at Puri, Odisha and the deities are moved from the temple (Srimandira) to the chariots.

This festival attracts a huge number of devotees who participate in the festival to the “Bada Danda”.

On the auspicious day of “Akshaya Tritiya,” the construction of these chariots begins. The chariots are made from a special kind of wood and a special group of carpenters who have been designing the chariots for generations has the authority to make them. There are no specific measurements to the intricate work of the chariots, the carpenters say they have learned it from their ancestors and use those special techniques to make the chariots.

Every year the three deities are taken to the “Gundicha Temple” – which is 3 km away from the Srimandira in their respective chariots and this marks as the Ratha Yatra (Journey in the Chariots). The entire Bada Danda roars with the sound of bells, flute, chants, drum beats, and traditional music as the procession begins.

There is a ritual of “Chhera Pahanra” which constitutes the King of Puri sweeping the floor of the chariots as a mark that all are equal before God. It gives the message that there should be no discrimination based on livelihood or caste before the almighty.

After returning from the Gundicha Temple, the three deities stop for a while near the “Mausi Maa’s Temple” (Aunt’s Home) and have an offering of the “Poda Pitha”, which is a special type of pancake and is one of the favorites of Lord Jagannath. After a stay for seven days, the deities return to the temple which is named “Bahuda Jatra”.