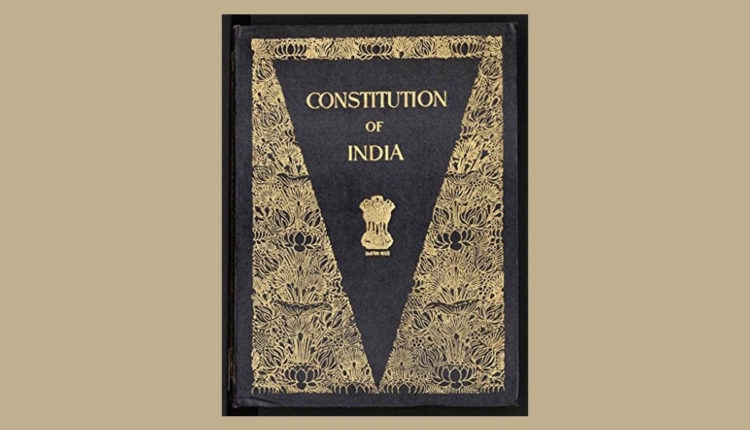 The constitution of India is an amazing document. It is the sole guardian angel of our Democracy. It has provided safeguards against any arm of the Government overstepping its well defined turf. The separation of powers among the Executive, Legislature and Judiciary with each having enough powers to checkmate the other, ensures that the rule of law prevails in our country. However, the most visible arm of the Government is its implementation arm – the Executive. The executive has to act in accordance with the laws passed by the legislature but subject to judicial review. For the passing of a law, there is a path prescribed in the constitution and that is the due process of law. If the path is not correctly followed and a law gets enacted, the Supreme Court can intervene and stall the implementation of the law. Outside the path prescribed in Part-V, Chapter-II, and Articles 107-111, no law can be passed, amended or repealed that affects the whole of  India. Lobbying for the repeal of a law or enacting a new law, by organizing a peaceful assembly of people to advocate the cause is a fundamental right of citizens under Part-III, Article 18 of the Constitution, but this right is subject to public order without interfering the freedom of other citizens who might not be in agreement with the assembly of people. It is for the Government to consider the petition or for the Judiciary to take suo-moto cognizance and direct the Government to consider the petitioner’s view. Laws in a constitutional democracy cannot be made or unmade by lobbyists pressurizing the Government to repeal a Law without following due process.

In light of the above, the assembly of people or the lobby claiming to represent the farmers of India that has been squatting outside the city gates of India’s national capital for over 50 days, is a lawful act in the exercise of their right to freedom under Article 18 of the Constitution of India. However, the demand they are making upon the Government to repeal three laws is undemocratic as the legislators who do not agree with the lobbyists cannot be coaxed and cajoled by the Government to accept the demand. The lobby has no official locus standi as representative of the people of India which the Parliament has. That is why the Supreme Court has ordered a stay in the operation of the laws temporarily and formed a committee to discuss with a much wider cross-section of farmers from all over the country representing all segments of the farming community, to take their inputs. The Judiciary cannot enter the legislative domain but in the interest of public order can intervene suo-motto to maintain peace and faith of the general public in the constitution and democracy. That is why the Government continues the dialogue and discussion with the lobby, showing a willingness to place their demands before the House for consideration following the due process. The outcome of the ‘due process’ could go either way, in the total repeal of the laws or in the partial amendment of the laws.

On the eve of the Republic Day of India, which is essentially the anniversary day of our constitution coming into effect, I hope good sense shall prevail and the siege of our national capital by the assembly of people lobbying for the repeal of the three laws and assorted demands for some new laws, will come to an end. There is no quick-fix solution to the demands of the lobby. The legislative process is time consuming and democracy is not known for moving with fast decisions. The lobby has made its points clear, the Judiciary has stayed the enforcement of the laws in question, and the Executive has agreed to review the issues with a wider round of the consultative process, which will ultimately take all the views and counter views to the floor of the House again. The ‘seize’ of our National Capital must cease now. The longer the ‘seize’ continues, it harms the soul of our Body Politic, and it would harm India’s standing as an icon of democracy in the World. The lessons from history tell us that whenever and wherever democracy has weakened it happened due to lack of respect for the Constitution, and such situations have always led to Anarchy followed by Dictatorship. The Constitution of India must prevail for Indian democracy to thrive. Recently, the oldest democracy in the World faced grave danger by some people disregarding the Constitutional path, causing incalculable damage to the proud image of the Nation. India is today the world’s largest democracy with arguably the largest book of the constitution. The framers of our Constitution have taken distilled wisdom from all over the world and have written down meticulously all possibilities of conflicts and provided ways and means to resolve the differences amicably. Our Constitution is holier and bigger than any Individual, any Interest Group, any Lobby, and any branch of the Government. The Constitution must prevail. The Constitution must be protected. Every sacrifice shall be worth it.