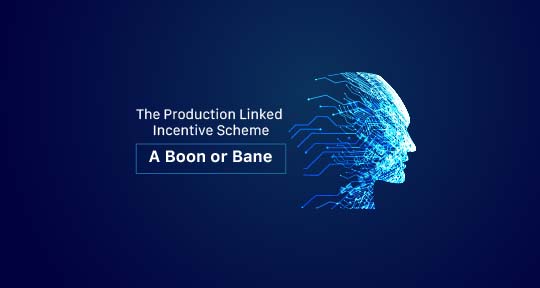 Professor Raghuram Rajan has stirred a hornet’s nest by calling the grandiose Production Linked Incentive (PLI) scheme which aims at making manufacturing in India globally competitive;  myopic and policy shortcut, by overlooking the long-term challenges to improve human productivity. He has cited the example of I phone 13, which sells at Rs 92500 in Chicago and Rs 129000 in India due to the imposition of 20% CD on the import of mobile phones. He brings out how the scheme will hurt the consumers by having an unhealthy amalgam of custom duty and subsidy of 6% on incremental sales, even if the domestic manufacturers import all the parts and assemble them in India!  This is clearly manifested in a significant increase in import bills from $2.7Billion in 2019 to $5.2 in 2021. The domestic cost will not be globally competitive unless our value addition in manufacturing improves substantially.  The latest National Accounts Statistics have brought out how India’s Gross Value Addition (GVA) has come down from 17.4% in 2011-12 to 15.1% in 2019 -20.

The year 2011 was a watershed year in terms of public policy when Mr. Krishnamurti unveiled the National Manufacturing Zone Policy which sought to increase the share of manufacturing in GDP from 15% to 25% in a decade’s time. More importantly, it is expected to add 100 million jobs @ 10 million per year, as against the specter of’ jobless growth’ noticed during the high noon of India’s growth story from 2000-2014 because of our thrust towards services-led growth. The NIMZs were to be operated through a Special Purpose Vehicle by galvanizing training and skill development through ITIs , improving labor productivity, developing infrastructure, clustering, technology acquisition& development, innovation, and FDI inflow. NMZ Policy was sector neutral & a wider canvas than the SEZ policy (2005) to promote exports.  The NMZ policy was deeply influenced by   Nicholas Kaldor’s seminal three growth laws viz; growth of GDP is positively related to the growth of manufacturing, productivity is positively linked to manufacturing, and production in nonmanufacturing is positively linked to manufacturing. The story of global manufacturing hubs of China, South Korea, Germany & Japan, with 30-35% of GDP coming out of manufacturing, with a consistent surplus balance of trade, is a testimony to the positive correlation between productivity, manufacturing, employment generation, and GDP growth.

Sadly, India has been an outlier in this manufacturing-propelled   & export-led growth experienced by countries like Japan in the 60s, and China in the 80s & Korea in the 90s. The PLI policy recognizes India’s dismal track record in terms manufacturing sector’s stagnancy in contribution to the GDP (16%), poor infrastructure, inflexible labor laws, tardy progress in land acquisition & low Human Development Index (HDI). It notes that India’s manufacturing productivity is about 30% less than China’s. The PLI scheme attempts to monetize the productivity deficit by a combination of import duty and subsidy on incremental sales. Unlike the NIMZ, PLI is sector biased & has identified 13 sectors like Pharma, Electronics, Semi-Conductors, Air Conditioners, Mobile Phones &ACC batteries. The last year’s budget has earmarked 1.97 lakh crore to provide subsidies in incremental sales, cash subsidies for new sales of goods manufactured in India, and incentives tied to incremental investments made.

The Pharma industry presently accounts for a global value share of 3-4% which PLI wants to increase to 10-20%. Dr. Reddy Laboratories has pleaded for some participation of government funding in their investment. In the AC Market, the government is pitching for an increase in production from 25 million units to 320 M units by 2037. It recognizes that critical parts like compressors, valves & coils are being imported from OEMs like China, Thailand, Malaysia & Japan. PLI scheme must not degenerate into the assembly of these imported parts, but how to manufacture indigenous substitutes of similar quality. Another criticism of the PLI Policy in this sector is that there is no provision for boosting the manufacture of super energy efficient ACs.   In the case of electronic vehicles, 50% of the cost is accounted for by the ACC batteries, which are imported. India’s trade deficit in products like ACC batteries, medical devices, Solar PV, and Semiconductors is as high as $41 billion.

That takes us to the Vedanta- Foxconn Joint Venture to be set up at Gujarat for setting up a display fabrication& semiconductor facility where they intend to invest $ 20 billion and PLI assistance would be $10 billion over a period of five years. The semiconductor is an important component in the electronic value chain (50%), used in automobiles, mobile phones, TV, and washing machines. Presently the import intensity is 85%.  A study reveals that the lack of focus on R & D by the Indian private industry is the major structural weakness, with only 0.5% of total turnover spent on R & D. The IC design takes place within the MNC R& D center with patents right kept abroad.  The largest share of value addition accrues in this sector to the patent owners. For harnessing benefits under the PLI scheme, it is necessary to link incentives to companies to companies investing 5-6% of their turnover in R & D. Further, organizations like C DOT and CDAC must develop indigenous technologies & license them to indigenous companies for commercial production.

Quite clearly the PLI scheme pays scant attention to the role of R& D in developing indigenous technology and the urgent need to improve our value addition, instead of being mere assemblers.  India spends a measly .7% of its GDP on R & D, as against 4.8% by S Korea & 3.45 % by the USA. India’s per capita spending is as low as $ 43 as against $173 by Brazil & $283 by Russia as per the NITI Ayog report. Even the big private sector companies spend very little on R& D. We are further hamstrung by our poor design capability in critical subsystems like detectors, microelectronics, and semiconductors.  Make in India through technology transfer is also handicapped by our poor absorptive capability, which is linked to proper skilling.

It must also be noted that India’s manufacturing sector is characterized by what Gunnar Myrdal called economic dualism, with SMEs accounting for 90% of the manufacturing contributing 50% of manufacturing, and big industries (10%) contributing 50% of GDP. Industry 4.0 which is piped piper of the new industrial revolution, with its thrust on AI, machine language, and robotics is beyond the reach of most SMEs. Short of the latest technology, constrained by scale and access to credit at reasonable cost from formal sources, 90% of SMEs which are micro-enterprises are not part of the PLI panoply. A clear predilection towards organized industry, protecting them by a tariff wall and subsidizing them has made consumers and microenterprises the most vulnerable segments of India.  Poor quality of education and skilling makes their predicament all the more distressing.  PLI is a policy shortcut that does not look at the long-term need to improve human & factor productivity. It also does not ensure that the micro-enterprises are part of this incentivization bonanza. As Professor Joseph Stiglitz bemoans: Market fundamentalism skirts shared prosperity & accentuates income inequality.

Why KIIT is the Best Place to Work?