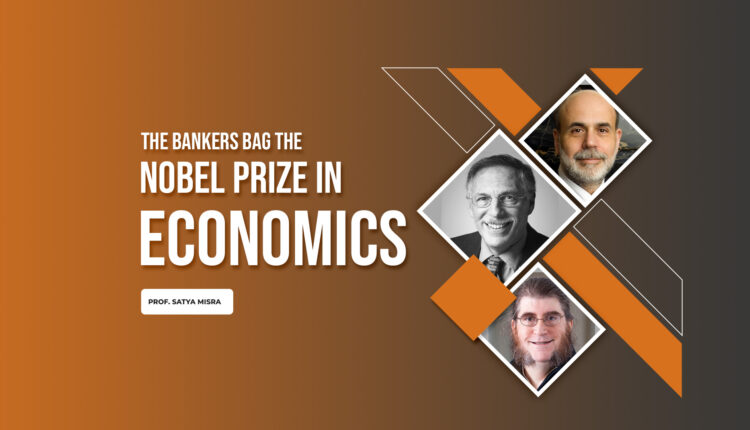 The Nobel Prize in Economics was the last to be instituted in 1968 by Sweden’s Central Bank to commemorate the bank’s 300 th anniversary. Herbert Simon was the first non-economist to win the prize in 1978 and Daniel Kahneman, the psychologist got it in 2002 for his pioneering work in behavioral economics. Of the 89 individuals who have received the prize so far, two are women, including Esther Duflo who got it in 2019 along with Abhijit Banerji. This year’s prize will be shared by Bernanke, Diamond & Dybvig,  for their pioneering research work in the 80s on how to deal with financial crises as a consequence of banking failure more effectively.

For economies to function, savings must be channelized into investments. However, there is an inbuilt conflict, as savers want instant access to their deposits, while investors and businesses want the funds to stay with them longer. Diamond & Dybvig show how banks offer an optimal solution to this problem. If a large number of savers simultaneously run to the bank to withdraw their money, the rumor may become a self-fulfilling problem. It is only by acting as a lender of last resort and providing deposit insurance, such run-ins can be averted by the apex banking institution.

Diamond demonstrated how as intermediaries between savers and borrowers, banks are best suited to assessing borrowers’ creditworthiness and ensuring that loans are used for a sound investment. Bernanke’s primary research work was on  what caused the great depression of the 1930s. While John Maynard Keynes identified lack of effective demand as the key problem, It was Milton Friedman  who was of the firm belief that economic depression happened because the Federal Reserve Bank reduced the money supply. Citing Friedman in his doctoral thesis, Ben strongly argued in favor of lowering interest rates significantly and even ‘helicopter drop’ money to fight deflation. He was popularly called Helicopter Ben.

Bernanke, the Professor from Princeton, remained the Federal Reserve bank Governor (2006-2014), during a period marked by the subprime crisis (2007-2008). In his book The Courage To Act (2015), Bernanke writes that it was due to the efforts of the Fed that a crisis greater than the great depression of the 1930s could be averted. The Fed interest rates were lowered from 5.25% to 0% in a year’s time. When this was considered insufficient to abate the liquidity crisis, he initiated quantitative easing, creating a $1.3 trillion kitty to buy financial assets from banks and the government. Such bailout initiative by Fed was emulated by the EU & Japan, which brought the financial crisis under control in a quick time.

There is a perceptible difference in the viewpoint of economists who believe in fiscal interventions  as opposed to monetarists like Friedman & Bernanke, who believe in control of money supply as the prime key .  The Nobel laureate Joseph Stiglitz strongly believes that the root cause of the financial crisis in 2007-2008 was poor regulation of the banks by the government, shadow banking and the proliferation of toxic assets like CDOs.  Paul Krugman, another Nobel laureate, was of the view that because of the repeal of the Glass Stegall Act (1933) in 1999, which prevented banks not to indulge in investment, even the Big Banks failed.

Keynes ruled the roost from the 30s till the 70s. Even a hawkish President like Nixon used to say “We are  Keynesians now ”. However,  when stagflation struck the USA in the 70s because of a sharp spike in oil prices, his prescription of public investment and deficit financing came as a cropper. This is when Milton Friedman had his high noon of monetary economics, which puts its  faith in controlling the money supply as the key instrument for restoring economic stability.  The  three economists who have been awarded the Nobel in economics this year echo the firm belief of Friedman and have made a seminal contribution to our understanding of how bank collapses exacerbate financial crises and how that can be averted through easy money policy. They also strongly believe that monetary policy should be guided less by discretion and more by a fixed target of inflation.

Covid-19 and the severe economic disruption that followed both globally and in India was a testing time for both fiscal and monetary policy experts. Interestingly,   In India, RBI followed the easy money policy advocated by Bernanke  to resuscitate private investment from the quagmire of despondency. It brought  down the repo rate as low as 4%. It also facilitated the disbursal of the fiscal stimulus package announced by the government  to the SMEs by providing loans which were  collateral free. Traditionally, the role of RBI is to regulate credit, provide adequate currency in circulation and ensure that inflation remains within a reasonable band. The Government has signed an MOU with RBI to ensure that inflation remains in the 4-6% band. Since inflation has been breaching the upper band for quite some time, the RBI has increased the repo rate to 5.5%.

Bernanke strongly believed that inflation targeting should be a thrust area for the apex monetary institution. Interestingly, the first winner of the Nobel in Economics Jan Tinbergen (1969) had suggested   that there should be one policy to combat one problem; like  the repo rate as an antidote to combat inflation.   It is often said that monetary policy has effective brakes but poor accelerators. Such a segmented approach , countries have realized, does not work. Neither Keynes nor Friedman are panacea for all economic ailments. It is only when monetary and fiscal policy work in tandem as the two wheels of a nation’s economic chariot, fiscal stability and economic growth will happen. This year’s Nobel winners’ s  research  that easy money policy during recession and inflation targeting when it crosses a threshold  has stood the test of time. It is  interesting to note that at the height of Covid 19 , Bernanke’s suggestion to drop  helicopter money found many advocates!