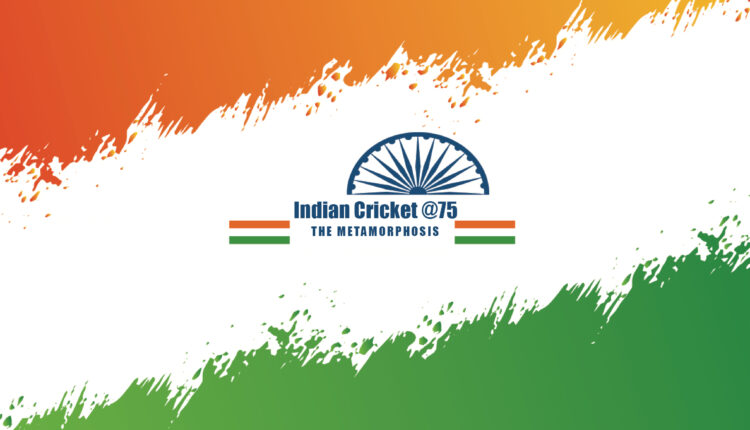 As India celebrates its 75th year of independence, it coincides fortuitously with 75 years in test cricket after independence. The Indian team under Lala Amarnath played a five-test match series in Australia in 1947-48 and was pulverized by a superb Australian team led by Don Bradman, who by common consent is considered the greatest batsman that cricket has seen. It was Don’s last test series and his pulsating bat plundered 715 runs against friendly Indian bowling. Indians had no clue how to handle the pace duo, Lindwall and Miller, & lost the series 4-0. The only saving grace was a century in both innings by Vijay Hazare at  Adelaide

India’s dismal record in test series took a surprise turn in 1971 when Chandrasekhar’s googly magic from a withered wrist walloped the English team at Oval.  It was preceded a resplendent jugalbandi in batting by Sunil Gavaskar and Dillip Sardesai, when India trounced the mighty West Indies led by Garfield Sobers I-0. The year 1971 can be considered a watershed moment in Indian cricket when the colonizer and best in the business, the West Indies, were humbled by a combination of the guile of the spinners and the grit of Gavaskar.  However, pace bowling remained India’s Achilles heel.  Vishwanath was an exception and an ideal foil to Gavaskar’s technical solidity. Vishwanath’s square cut in the words of Tony Cozier was like ‘an extension of his hand’. Vishwanath’s 97 not out is considered by the connoisseurs as one of the best played by an Indian at Chepuk in 1975 against a rampaging Andy Roberts at his best.   Mohinder Amarnath has possibly shown the best possible spunk against the best pace attack of Pakistan and West Indies in the 80s. India’s epic win against a challenging target of 403 at Port of Spain in 1976 against the searing pace combine of Roberts, Holding, and Holder was orchestrated by three musketeers; Gavaskar, Vishwanath, and Amarnath.

The victory in the 1983 world cup is another watershed moment for India in the short format games, where India showed enormous fragility in their two outings earlier in 1975 and 1979. Kapil’s blistering 175 against Zimbabwe in 1983 had a Viv Richards insouciance about it.  He repeated the magic when he took an incredible catch running back to see the back of a rampaging Viv in the 1983 world cup final. Like Dhoni’s helicopter six to win the World Cup in 2011, Kapil’s incredible catch is one of the best visuals of Indian cricket.

The 1990s and early twentieth century were lit by the majestic presence of Sachin Tendulkar, ably complemented by Rahul, Saurabh, and Laxman. India’s middle-order batting has never been bettered. Both Sachin & Dravid have played incredible knocks against Australia in their backyard.  However, the greatest test innings played by an Indian was by VVS Laxman whose 291 against Australia at Eden Garden in 2001won India an incredible match, after being asked to follow on. In Kumble, India discovered a real match winner and in Sewag, an opener whose hand-eye coordination helped India to win over Pakistan in their backyard in 2003-04. This series purged India of its fear of the Pakistan team led by Imran Khan in the 80s. The Indian team nearly won the series against the best Australian team in 2005. The captaincy of Saurav has been a high point in leadership.  Saurabh mentored stormy petrels like Sewag, Harbhajan & Yuvraj exceptionally well. While Saurav brought in the belief in the Indian team that they can win against the very best team away from home, it was MSD who won us the World Cup in 2011. He has been the best leader that Indian cricket has seen. While Kapil’s win in the 1983 world cup is sometimes considered a fluke, Dhoni made winning tournaments a habit.

As we step into 2022 and prepare for the World Cup, India is ironically plagued with an embarrassing richness of talent in terms of openers and pacers.  India never had a third credible opener to choose a combination of two. We now have at least five; Rahul, Rohit,Gill , Rituraj , Ishan, and Dhawan to choose from. But the biggest windfall has been in terms of fast bowlers; Bumrah, Umrah,  Shammi, Siraj , Avesh Khan & Ashrdeep. This has been because of the facility we have created at NCA, Bangalore, and the training they got under the tutelage of the two greatest fast bowlers of our time, Dennis Lillie and Mc Grawth. Don Bradman, commenting on India’s test performance after 1947-48 had said: ‘They lack a really fast bowler and are weak in the field’. He would be certainly happy with the way Indian bowlers have emerged as a pacy side. In fielding also, the likes of Jadeja would have warmed his cockles.   In Rishav Pant  , India has a rare talent & match winner.  The way India won the test at Perth, the paciest wicket, last year is thanks to the sterling knock of Rishav and grit of the tailenders.  The test series win against Australia in 2020-21 is another milestone, India can be genuinely proud of.

Despite such solid advantage of our bench strength, the Indian selectors have a Hobson choice; whether to retain Kohli or not.   Kohli’s form has plummeted far too long. If any Indian batsman can challenge Sachin for the batman’s crown, it has to be Virat. In terms of fitness and match-winning potential, he has very few peers. It’s a pity that the likes of David, Sachin, and Gavaskar are not able to sort out his technical glitch. One recalls, how Bradman helped out Sobers to handle Lilee, whose bunny he had become in the 1971 series of Australia vs Rest of the World. His 254 against Lilee is considered by Bradman as the greatest innings he has seen. Similarly, AB Devillers writes in his autobiography ABD how Kallis helped ABD to get over his flaws as a susceptible slam-bang hitter to become one of the most dependable matchwinners of our times. Besides the Kohli conundrum, the dodgy fitness of Rohit Sharma leaves the leadership issue in an open loop.   Indian cricket @75 has metamorphosed from slow trundlers and lazy fielders to a head-hunting pack, rearing to win. It is also at the crossroads of choice aplenty with the looming uncertainty about the continuance of its stars.  The time has come  to groom the youngsters and abdicate the baggage  of the past.

Prof Misra is a cricket buff