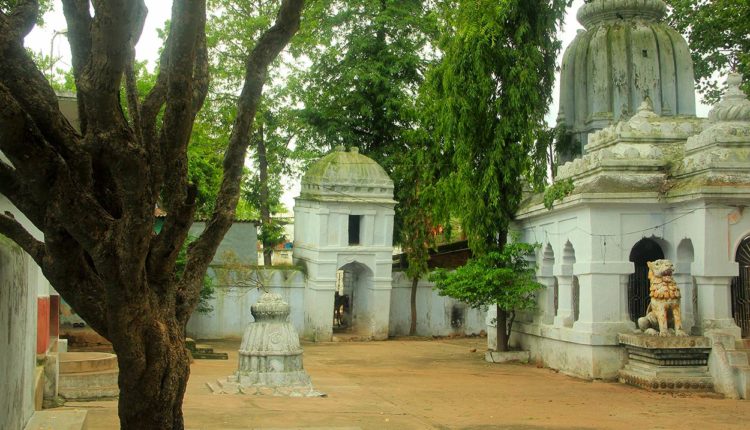 Most of us would associate the city of Sambalpur in western Odisha with the world famous Hirakud Dam, Sambalpuri saree or the burning cauldron it becomes during summers. Connected to the capital city via the splendid NH 6, Sambalpur boasts of some unique attractions in the country – one of which is the leaning temple of Huma.

Approximately 30 kms south of Sambalpur town, on the banks of the river Mahandi lays a tiny obscure village – Huma. With less than 200 families residing in this diminutive hamlet, the place would have remained inconspicuous, if not for a baffling structure within its environs.

Constructed probably in the 16th century AD, this ancient temple holds the unique distinction of being the only ‘leaning temple’ of the world. The more intriguing part is that while the edifice leans, the pinnacle of the temple is perpendicular to the ground. Another uncanny characteristic of this temple premise is that all other structures inside its boundary like the Bhairabi temple, Bhubaneswar temple, Aruna Stambha, Kapileswar temple and even the newly constructed Lord Jagannath and Hanuman temple are tilted in different directions at various angles.

One can’t help but compare it with the world famous Leaning Tower of Pisa. Though comparison in terms of size and grandeur would be puerile, the exact reason for this anomalous phenomenon at Huma is still shrouded in mystery. The reason for the aberration at Pisa is well known with the structure starting to tilt during its construction in 12th century AD owing to a measly three meter foundation, set in weak unstable subsoil. However, the story here is different. Speculations vary from change in the earth’s crust due to earthquake to unstable rocky bed of the river to deliberate inclination by the architect to safeguard the temple during floods, none of which is confirmed. So, it’s probably best to abandon any attempt at thoroughness and wander about desultorily, pondering about the unusual ways nature can surprise us.

The temple courtyard opens to the serene Mahanadi river plains. The rocky outcrop of the river bed is quite prominent in this region. The sight of the crystal river snaking past huge coloured boulders is a sobering experience. Schools of reddish coloured fish (popularly called Kudo) can always be found flocking at the base of the temple stairs eagerly waiting for their next bite. One can always find overenthusiastic tourists feeding them with tit bits which are specially packed and sold in the temple premises. The cacophony they create is reminiscent of a kid’s reaction during his first carousel ride. Since the small fish population here are considered sacred and believed to be a part of the temple, they are never hunted, probably making them the luckiest fish species surviving on the planet.

In a place forever doomed to be sleepy, the leaning structures provide the much needed impetus to the region giving the residents a reason to celebrate major festivals like Shivratri with great fanfare and aplomb, accompanied by the annual village fair where thousands of devotees throng to this sleepy village in the month of February-March. If Pisa seems too far, it won’t be a bad idea to check out our indigenously built ‘unique’ temple of Huma.

Getting There: Sambalpur is a major Western Odisha town and has fantastic road and rail connectivity from the state capital Bhubaneswar. It’s a 5 hours drive via some beautiful forested roads.