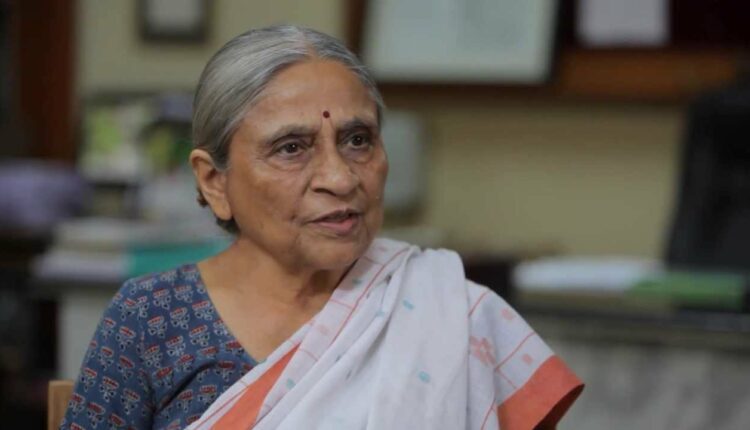 174 years ago, Sabitri Bai Phule founded the first modern Indian girls school in Pune and is considered the pioneer of India’s Feminist movement. 10 years ago when Mrinal Gore, the politician and activist died, the newspapers screamed that the’ Pani wali Bai ‘is no more, to commemorate her effort to bring drinking water supply to Goregaon, a north Mumbai Suburb. Ela Bhatt completes this trio of exceptional women from India who cared for the women in the informal sector, who bear the brunt of all kinds of humiliation and deprivation because the laws don’t protect them. Soft spoken, intensely compassionate, dedicated to principle, self-effacing, Ela Bhatt was a lawyer by training, a labour leader by choice, a banker par excellence and a social activist whose quest for holistic empowerment of the most deprived sections of women will be indelible in the sand of time.

Ahmadabad was considered Manchester of India, with a 60 mills and 1.41 lakh textile workers. Ela Bhat started her career teaching English at SNDT women’s university and joined the legal department of textile labor association (TLA) in 1955 in Ahmadabad and headed the women’s wing in 1968. During her stewardship in TLA she saw firsthand how the women in textile mills were forced to supplement their income by weaving, stitching, rolling cigarettes and selling fruits. Since law didn’t protect women who worked from home, they were routinely oppressed by money lenders. Sitting on the steps of the warehouse she listened to their tales of erratic wages, housing problem and health issues. In December 1971, the idea of SEWA was born to organise working women in the informal sector so as to use their collective strength to fight poverty, gender, injustice and give them access to credit. The women were to be rescued from the cycle of debt and extortion. Due to their informal character banks didn’t extend loans as these female’s workers couldn’t provide collaterals. This triggered formation of Mahila Seva Coooperative Bank with 4000 women contributing Rs. 10 each. Its goal was to provide small loans and financial counselling and help them to set up their small business.

Today SEWA includes healthcare, child care, housing and legal aid: all geared towards women empowerment. SEWA in 1974 became the template for Mohmed Yunus to set up the Grameen bank in 1976 . In 2007 Nelson Mandela invited Ela Bhatt to join The Elders to promote human rights and world peace . The common link that influenced both Mandela and Ela Bhatt was Gandhi, for whom Satya (Truth), Ahimsa (Nonviolence) and Sarvadharma were the key leitmotifs of a healthy society, where there is no place for hate. It was Gandhi who had said in a highly monetized economy where everything has a price, we must be in control over money rather than money controlling us. This remains the most biding principle of Ila Bhat.

In her book: Anubandh: Building around 100 miles’ community” she wrote that it is necessary to follow mutual interconnectedness towards a sense of wholeness. We need to identify basic needs like food, clothing and shelter, while education healthcare and access to credit are basic services. She was firmly of the view that if the six 6 basic needs and services can be met at the local level, we can set in motion holistic development of people, their community and environment. She considered organisation as the bedrock of social change and considered women as the key to building peaceful, stable and sustainable community . As each 100 mile community grows it will

spread and overlap like oceanic circles and create a peaceful world in which income security is assured and social security is promoted.

One of the biggest challenges of economic development in developing economies like India is the preponderance of informal employment. As per the ILO while in developed countries, employment of men and women is only 18-19% in informal sector, in case of developing countries it is 92% for women and 87% for men. Further the informal sector accounts for nearly 90% of total employment contributing only 40% to the GDP while the organized sector with 10% employment contributes 60%. The ILO figures further bring out how women do 60% of worlds’ work and get 10% of its income and own 1% of its assets. Given these challenges Ela Bhat came up with the SEWA Grit Ltd in 2011 with a equity of 13.5Crores. Today it has 5 lakh members with about 235 crores extended to its members. Ms Bhat also set up the SEWA mutual benefit trust whose objective is capacity building, financial planning and discussion, health and hygiene, construction safety , green technology and ownership of tangible assets.

Edward Webster in a research article (2011) titled “Work and Economic Security in 21st Century” brings out that there are two concepts of modernity: Labour and the household. Through SEWA the notion of labour has been broadened to include the marginalised, self employed women workers in the informal sector. The ILO decided to consider the self employed women as part a part of labour as late as in 1993 due to consistent crusade of Ela Bhat. Instead of bargain collectively with the employer, Webster writes that SEWA empowers women by building collective power through co-operatives. Bennet Spencer observes that SEWA has developed a deep layer of confidence and effective, women leaders and in making real improvement to the lives, they are bolstering skill development, social protection (health insurance and child care) and financial services through banks. For Ela Bhat the community is beyond the idea of caste, village or ethnicity. It centres around work as a livelihood. For her household is not simply a site for reproduction but a place of production and income generation.

Based on her crusade to improve the economic condition of vulnerable people in the informal sector, South Africa’s instituted a community workshop which ensures 2 days of work to every informal worker who is a part of the municipality. The MNREGA program in 2005 had the same refrain, to provide 100 days of work to every unskilled labour in the rural areas. Mission Shakti in Odisha where 70 lakh women are organised into 6 lakh Self Help Groups to promote saving and livelihood opportunity amongst women has a distinct Ela Bhat imprint about it. While receiving the Niwano Peace price 2010, Ela Bhat was asked how would SEWA deal with the power of corporate capital in the age of globalisation. She was candid enough to reply “it is a losing battle. We are poor but not destined to be poor. You cannot rub us of our collective strength.” Economic security in 21st century will only be realised once the dignity of work of marginalised women is recognised and given an institutional voice. The Economist in a recent edit has observed that the biggest challenge of India is how to formalise its informal economy. Raghuram Rajan in his book The Third Pillar believes that the tragedy of our times is that the state and markets are overlooking the role of community. Ela Bhat had underlined their importance in 1972 and truly empowered women in the informal sector in a holistic way.