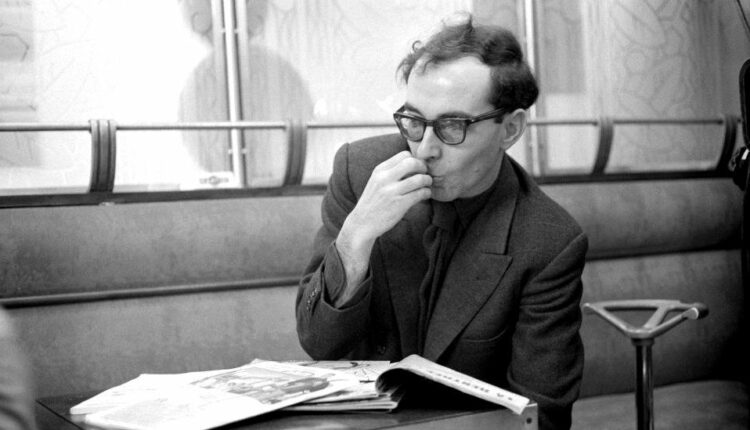 Jean -Luc -Godard was among the world’s most acclaimed directors, known for classics like Breathless (1960) and Contempt (1963), which broke with convention, inspired iconoclasm, and helped kick start a new way of filmmaking, with handheld camera work, jump cuts, and existential dialogues. With his tousled hair and heavy-rimmed glasses, he was a veritable revolutionary who made artists of movie makers, putting them on par with” master painters and masters of literature.” Susan Sontag compared him with Pablo Picasso, ‘as one of the great cultural heroes of our time’

“A movie should have a beginning, a middle, and an end, but not necessarily in that order”. Godard once said. He was not alone in creating France’s New Wave, an accolade he shares with Truffaut and Rohmer. However, he became the poster child of the movement, which spawned offshoots in Japan, and Hollywood. He received global acclaim for his 1960 feature Breathless. Starring Belmondo.  It tells the story of a petty thief named Michel, and the film begins with his stealing a car and shooting dead a policeman on the way. The film is essentially about the relationship between Michel and an American girl Patricia who sells the New York Herald Tribune on the streets of Paris. Michel lives for the moment while Patricia has an ambition of some kind. The film ends with Patricia betraying him to the police, and Michel being gunned down on a street, with her watching.

A famed Godardian device is the jump cut, ie his rejection of seamless editing, the narrative becoming disjointed because of the cutting between lines. What Godard apparently strives for is realism, not in the neorealist sense but in the sense that he is emulating actual life. Life, as we experience, is not tidy. Random things happen to us at every moment, events that do not fit a purpose or teleology. Godard attempts to eschew artifice. He insists on real conditions, filming on the streets using natural lighting. One could argue that instead of the uncomplicated aesthetic of realist cinema, he emphasizes the artifice of cinema to seize upon the fragile truth.

Godard’s next great film Contempt is a film about filmmaking. Paul is a writer engaged by an American producer to script the Odyssey to be filmed by director Fritz Lang. Paul’s wife Camille,  is courted by the producer. There is an ironic parallel between the story of Ulysses and Penelope and that of Paul and Camille. What takes Contempt to a different level is that it is filmed on the Mediterranean, the same sea on which the actual Ulysses sailed. There are two stories taking place on the same sea, the heroic one by Homer and the sordid one around the players of the film.

Godard’s films are not complex in terms of content but he discovered a new idiom that suited the times. He was fond of quoting Lenin:’ Ethics is the aesthetics of the future.’ What this suggests is that all artistic criteria will be reducible to ethical values because beauty cannot exist in a vacuum and must depend on the notions of liberty and justice. His obsession with the real is essentially an ethical concern. His best films are personal explorations of the moral issues of their times and he gets wonderfully poetic effects as in Vivre sa Vie.

Nothing was sacrosanct with Godard, in films or in life. ‘The cinema is truth twenty-four frames per second. All you need for a movie is a gun and a girl. ‘, he wrote. Critics went lyrical about him. Like there is no cinema before Godard and cinema after Godard. Godard wrote, ‘I escaped from a bourgeois family into show business and then discovered that show business was bigger bourgeois family than my own.’  His work revolutionized the motion picture form through experimentation, by eschewing the artifice and formalism of realist cinema. Macron tweeted: We have lost a national treasure, a look of genius.

Godard’s genius was not limited to France; he was indeed a godfather of boundary-breaking in cinema. Quentin Tarantino ‘s cult film Pulp Fiction took up the mantle of the boundary-bending tradition initiated by Godard. Earlier Martin Scorsese did that with Taxi Driver;  the disturbing neo-lit psychological thriller of a Vietnam veteran turned cabbie driver who steers through the street all night to clean up seedy New York. Godard had no room for passive spectators. “I think of myself as an essayist, instead of writing I film them”. Not many would have seen his films, as they are screened either in film festivals & societies. Satyajit Ray wrote in his book ‘Our Films, Their Films’, I find him intimidating. I had the good fortune of watching Breathless in Nandan ( Calcutta) in 1986 when Ray was also a spectator.  It was a visual deluge for me, watching the confluence of jump cuts & irreverence of Godard serenading with the resplendent lyricism of Ray sitting quietly in the dark four walls of Nandan. Creativity was buzzing & it was soul-stirring. With Godard gone, the New Wave cinema has lost its godfather!

Prof Misra is a film buff