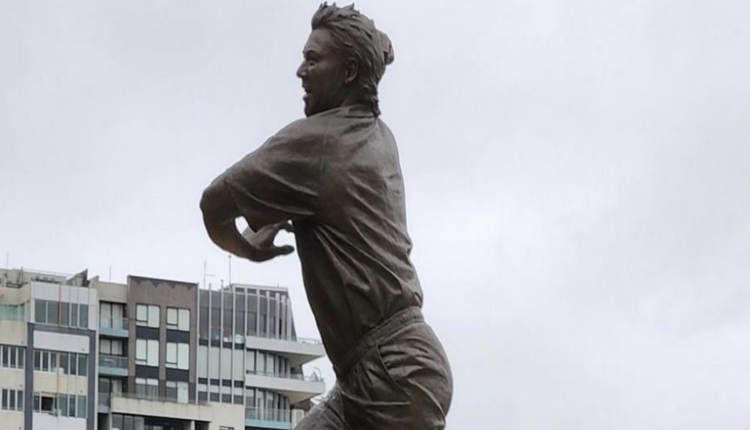 Kerry Packer, the tycoon who engineered the rebel series in 1977 in Australia, with the tagline “Big Boys Play at Night’ once told Shane Warne: ‘Sell the blue Ferrari, son, lie low for a while’. Shane writes in his autobiography ‘No Spin’: ‘So I did, bought a silver one. Lying low has not been my thing. I have lived with the moment and ignored the consequences. This has served me both well and painfully, depending on which moment.’ If it was not sex, drug and rock and roll, it was certainly wickets, women, wine, cigarettes, bets, slimy texts, use of diuretics; not necessarily in that order. It was the last that kicked him out of the 2003 World Cup.

Unlike disciplinarians like Don Bradman, who wielded the willow and baton of the administrator with rare firmness, he was flamboyant and undisciplined like his predecessors like Keith Miller, who defied the Don in the cricket field in the 1940s, and Ian Chappell who challenged the dour inflexibility of Bradman as the Chairman of Australian cricket in the 70s, as captain of the Australian team. Shane doted on Ian and no wonder he betted on Warne to be the Australian Skipper which went to Ponting, who was backed up by Allan Border. By common consent he was the best captain, Australia never had. He proved his mettle as the captain of Rajasthan Royals in 2008, winning the trophy by motivating absolute rookies like Jadeja  and Yusuf Pathan ,with whom he communicated through the  eyes!

He drank heavily in English pubs; those really put the weight on. He also smoked like a chimney, lighting up a fag as soon as the dawn broke. He forgot all that when he walked into a cricket field. It was as if someone had shut the door behind him. The only traces of the play boy were the peroxide hair, the chunky waistline, and the sexily unbuttoned shirt and the wildly joyous celebrations when he knocked a batsman over. Of his 708 wickets , certain spells of skill stood out, such as his 7 for 56 against the formidable West Indies team in 1992 and in 1994 , his 8/71 against England. His sweetest moment was when he took 700 test wickets, at his home ground in Melbourne, where a statue has been built by the sculptor Louis Laumar. Shane writes: ‘It’s a great honour. It’s a bit weird seeing yourself there, but I am very proud’.

Of the five best cricketers of all time Wisden chose in 2000, four were batsmen; Jack Hobbs, Don Bradman , Gary Sobers  & Viv Richards . The lone bowler was Warne, ahead of the wily pacer Dennis Lillie, the scourge of all batsmen in the 70s . It’s not surprising that he along with Muttiah Murlidharan  and India’s Anil Kumble proved in the 90s that slow bowling is not a dying art. In an era when most of the bowling was fast and brutal, he was slow, subtle and cunning. He made it slower by ambling to the crease quickening for a couple of steps, passing the ball nonchalantly from left hand to demon right, then letting the ball rip , drift, and bounce to the batsmen’s left and spin in sharply, sometimes square , to hit the leg stump, or to be nicked to a nearby catcher. His favourite was the back spin flipper, launched with a snap of the thumb and forefinger to fizz out of his hand and skid fast and low off the pitch. His greatest happiness was not a wicket destroyed but the look of incredulity on the batsman’s face as when with the first ball in 1993 he bamboozled Mike Gatting with a leg break, earning sobriquet “ball of the century”. Gatting’s nose was earlier flattened by Marshall in 1986, but he was never as befuddled as with Warnie’s fizzer in 1993.

Ravi Sastri who pulverised him in 1992 in the Sydney test along with Sachin writes in his book Star Gazing: ‘He gave a dramatic send off with terribly unflattering figure of 1/150 in the opening match. He had a sharp tongue, sharper mind and enjoyed mental jousts.  He can pick up nuances in a match ahead of most, like Ian Chappell. At his best, he was pure theatre, a larger than life character.’

Giden Haigh wrote: ‘It was said of Augustus that he found Rome brick and left marble’. The same is true of Warne and his spin bowling’. The world of cricket has not seen a better pace spin combine than of Glen and Warne in the 1990s, as they hunted down the best with their metronomic accuracy and guile, collecting 980 wickets together.  They changed the adage in the 70s that only fast bowlers can hunt in pairs. In the 70s it used to be said ‘If Thommo will not get you Lillie will.’ In the 90s it was changed to read: Ashes to Ashes. If Mc Grath can’t get you, Warne will’.

His legion of fans kept the faith through thick and thin. Wine and women were his folly, cricket his fulfilment. Under his cocky charisma, he nearly snared Elizabeth Hurtley as his bride, and for the first time shed yards of lards. There was besides a friendly and ordinary bloke, whose favourite food was Vegemite toast and a bag of chips who never refused a fan an autograph, He was both a gadfly and God of spin and will remain the cricket lodestar, a Sultan of Spin, who would possibly be driving a safari in heaven, painting the sky red and bringing cheer to the staid & humourless, with a pint of beer. On 30th March, his memorial service would be held at home ground, MCC, where he took the 700th wicket, bowled a hat trick. He made mistakes, because he was only human. The blond bombshell was a true entertainer and would remain possibly the most charismatic and colourful cricketer, that cricket has seen.

* Prof. Misra is a Cricket Aficionado.