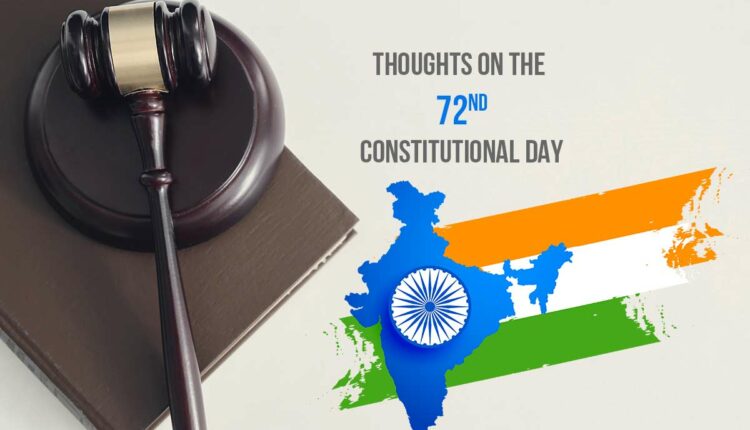 As India celebrates its 72nd Constitutional Day it would be appropriate to recall what Justice John Marshall, the longest serving Chief Justice of US, had observed “a constitution is framed for ages to come and it is designed to approach immortality as nearly as human institutions can approach it. Its course cannot always be tranquil”. Indeed, the course of Indian constitution has been far from tranquil. It has witnessed 105 amendments so far. The most transformative amendments have been addition of socialistic and secular to the Preamble (1977), deletion of right to property as a Fundamental Right (1978), addition of right to education as a Fundamental right (2002), creation of third tier democracy through Panchayats and Municipalities (1993), formation of GST Council (2016), and 10% reservation for the Economically Weaker Sections of the Society (2019).

The Supreme Court has been the custodian and interpreter of the Constitution & the spat between the Court & party in power has been far from tranquil. The Parliament introduced the 24th amendment in 1971 to arrogate to itself unfettered powers to amend, delete or emasculate any provision of the constitution. However, in the path breaking Kesavananda Bharati judgement (1973), the Court has   enunciated the basic structure doctrine, which includes seminal ideas like secularism, federalism, secularism, separation of power& judicial review, which cannot be trimmed by the Parliament. The Parliament in retaliation tried to amend Article 368 in 1976, by taking away power of judicial review and making Parliament supreme. However,   The Supreme Court in the Minerva Mills case (1980) gave a body blow to such Parliamentary wish to be omnipotent, by striking down both 368(4) & (5). To quote Justice Chandrachud “The donee of a limited power cannot convert limited power into an unlimited one”. This judgement has finally crystallized the position of the Supreme Court as the last bastion against Parliamentary absolutism & defender of the canopy of basic structure doctrine.

The other major development has been checkmating the wanton misuse of Constitutional emergency under Art 356, where the Governors do the bidding of the party in power at th Centre. In the SR Bommai judgement (1994), the court clearly ruled that majority cannot be decided in the lawns of Raj Bhawan but on the floor of the assembly! The Bommai judgement (1994) also debunked the myth that the President & the Governor are not answerable to any court in performance of their duties under Art 361, if they are found to be patently arbitrary, and biased.  Floor tests in several states like   Uttarakhand, Arunachal Pradesh, and Karnataka & Maharashtra have significantly scuttled misuse of Art 356.  The anti-defection amendment introduced in 1985 has also strengthened the hands of the Speaker & the Courts to curtail political horse trading.

Prof. Andre Beteille wrote “A constitution indicates the direction in which we are to move, but the social structure will decide how far we are able to move and at what pace”. The founding fathers were of the view that reservation of SC/ST will remain a transitional requirement. It has now been extended up to 2030 through the 104th amendment.  The ambit reservation was amplified to include OBCs. The Modi government has now provided another 10% quota to Economically Weaker Sections of the society. The juggernaut of caste based reservation has now been amplified by class based horizontal reservation. Quite clearly, merit based selection government jobs have further suffered under the rubric of positive discrimination. This has created a piquant situation as to whether the 50% cap put by the Supreme Court in the Indra Sawhney Case (1992) will now go up to 60% with EWS reservation. When the Tamil Nadu government tried to take advantage of this for admission to medical colleges, it has been challenged in the Supreme Court, which has chosen not to freeze the 10% EWS quota and kept its decision in hibernation.

The Constitution revolves around two critical chapters, Part III dealing with fundamental rights like right to equality, various kinds of freedom and right to life and Part IV which deals with promotion of socio economic justice. In the Champakam Dorairajan Case (1951) the Supreme Court decreed that Part III is superior over Part IV, being justiceable.  However, the Supreme Court in the Minerva Mills Case (1980) has redressed the balance and called these two chapters’ as’ two wheels of a chariot’, so that they promote both distributive justice & individual freedom. The Court has also expanded the scope of Right to Life to include Right to Privacy in the Puttaswamy Case. However, India’s record in terms of quality of foundational education remain dodgy (ASER Survey). Rampant anaemia bedevil nearly 50% of adolescent girls (RSOC Survey 2013). Large scale malnutrition of  around 43% of  children  (NFHS Survey V 2020) leave them stunted or wasted. The Global Hunger Report is an eloquent testimony to our nutritional deficit. . The demographic dividend that India hopes to harvest therefore critically hinges around our success to improve human capability development, adequate nutritional intake and bridging the digital divide.   Dr.Ambedkar had observed on 26th January 1950: We are going to enter in to a life of contradictions. In politics we have equality & in economic & social life we have inequality, which we need to minimise as soon as possible. As India celebrates its 72nd Constitutional Day, the coalescence between political, economic & social equality remains the most fundamental challenge. Market fundamentalism has cast a shadow over shared prosperity.     .