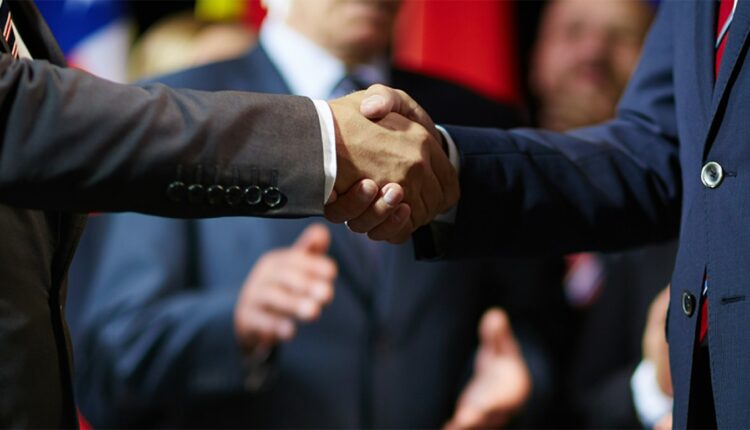 The Handshake That Changed the World

Several historic handshakes between arch political rivals have changed the world. Like the one between Ronald Regan and Gorbachov in 1985 that ended the ideological cold war between USSR & USA, disintegrating USSR by 1991. Or between Yitzhak Robin and Yasser Arafat in 1993 that brought peace between Israel & Palestine Liberation Organisation. In recent memory it has between   Raul Castro & Barrack Obama, ending the frosty relationship that festered between USA & Cuba in 2016. However, the handshake that happened between President Richard Nixon & Premier Zhou En Lai on a cold blustery morning in Beijing airport on 21st February has been the most iconic one. Nixon knew that he was the first US President to visit China after twenty-fiveyears of diplomatic freeze between the USA & China. But more importantly he was aware how John Foster Dulles, the hawkish anti-communist Secretary of States of USA, had refused to shake Zhou En Lai’s hand in a conference in Geneva in October 1955. When asked why he did not reciprocate, Dulles hadsaid: We will meet in a car crash! While the protocol warranted that Zhou should be the first to extend the hand, President Nixon took the initiative and shook Zhou’s hands warmly. Nixon saws the handshake as the talisman of the entire visit and the first step to obliterate the discourtesy that was dishedout  by Dulles.

Nixon spent an entire week in China along with Kissinger, his Secretary of State, who had planned the visit, a year before in cohort with Yahya Khan,  the infamous President of Pakistan. It is most ironic that Richard Nixon became the Vice President under D Eisenhower in 1952 because of his strong anti-communist stance. But two decades later he was aware that there will be significant shift in cold war balance if USA can drive a wedge between USSR and China. USA also saw in China a facilitator who can resolve the Vietnam war. Of course trade and commerce, given the huge market that China offered ,was tantalizing enough. As William Clay writes: In diplomacy, there are no permanent enemies or friends, only permanent interests! Nixon sowed the seeds of permanent trading interests in his weeklong whirlwind visit of China.

This historic visit included an hour long meeting with President Mao Tse Dung, the patriarch of Communist party. Interestingly, both Mao and Nixon were total ideological opposites. Yet it’s ironic that they reached the same conclusion at the same time to have a historical breakthrough in relationship. The story goes that when Mao told Nixon: I voted for you, Nixon replied, “You voted for the lesser of the two evils.” To which Mao replied,“I like right minded people!”

The China of 1972 was relatively impoverished, while the middle class of USA was enjoying a golden period. An average Californian teenager could nonchalantly race his own car. One of the requests Mao made to Nixon was to permit Chinese graduates to pursue higher studies in the American universities, particularly in the field of Science, Engineering & IT. It was due to this foresight that today the Chinese students have been able to embrace the cutting edge technologies much better than the Indians. China today has a vibrant upper middle class with Mercedes Benz selling 7.58 lakh passenger vehicles while they sell only 2.76 lakhs in the US. The other major fillip to US China relationship came with China’s entry into the WTO in 2000. This was actively lobbied by President Bill Clinton who saw in China’s emergence as a major manufacturing power, helpful in terms of cheap imports into the USA for a large number of middle class consumers. China accounts for yearly 40% of America’s trade deficit today which stands at 303 billion.   100 major MNCs have invested handsomely in China with FDI inflow of about 1239 billion dollars in 2020. In terms of GDP at PPP (purchasing power parity), China has an estimated GDP of 24 trillion dollars as against 21 trillion dollars of USA.

The trade war between USA and China started during the  Presidency of Donald Trump who had been promising the local population of giving jobs and making good nearly the job loss of around 3 million Americans, due to massive inflow of Chinese goods into USA. President Trump had also highlighted how the Chinese companies resort to unfair trade practices, indulge in IP thefts, coerce American firms to part with technology for establishing production bases and joint ventures in China and undervalue Yuan.  While most of these allegations have enormous substance, Nobel laureates like Stiglitz and Krugman  believe that the trade war is hurting the interest of ordinary American consumers & free trade is wine win for both the countries. President Joe Biden has. therefore, taken a more cautious approach in the stemming trade war by observing “There is a need for guardrails to ensure that competition doesn’t veer into conflict.”

The Chinese scholar Sheng Hung believes that the Chinese model of state capitalism is incompatible with market reforms. Contemporary Chinese society is portrayed in USA and British minds as nationalistic and militaristic. In the block buster movie, Wolf Warrior 2, these aspects are highlighted. However, the coming years is likely to see steady rise in prosperity in China. It is investing handsomely in Artificial Intelligence so that it can become the global leader in A I in the next 5 years & take full advantage of Industry 4.0. The average middle class consumer is indifferent to the trade war with the US. Testimony to this is that companies like Starbucks expect to increase its footprint from 5000 stores in 2021 to about 6000 next year. The Chinese middle class, American progressives and the MNCs welcome continuous engagement and avoid contentious trade wars. The week, (21st February 1972 – 28th February 1972) sowed the seeds of potential synergy between China and USA irreversibly. The handshake between Nixon and Zhou En Lai, 50 years ago changed the contours of World politics & economics.

*The author is a Professor in Economics & Constitutional Law. He is also Dean of School of Management. He can be reached through e-mail at misra.sn54@gmail.com.