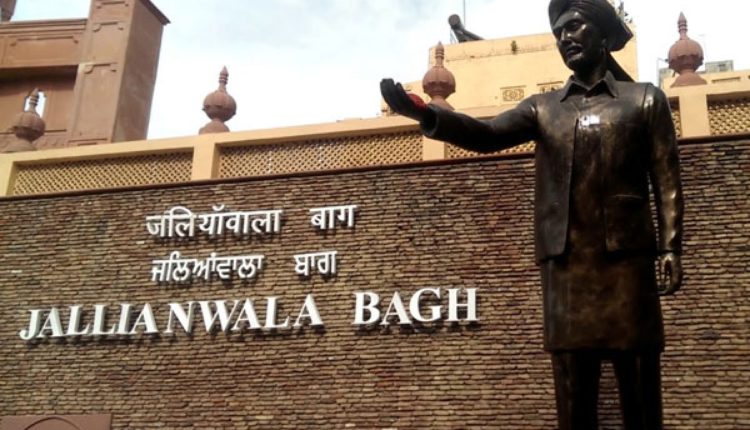 The Scars that will Never Heal

On 13th April, 1919, exactly 102 years ago, a British Brigadier General Reginal Dyer ordered firing at a crowd estimated at between 5000 – 30,000 which was completely peaceful and non-violent. He had not given any advanced warning when the fire was opened. His personal bodyguard Sergeant Anderson later noted that the crowd “seemed to sink with the ground, with a whole flutter of white garments. The firing squad of 50 fired exactly 1650 rounds non-stop for about 10 minutes until the entire crowd had fled or fallen. The wall still bears testimony of the bullet holes. Two Gurkhas later remarked with evident relish “while it lasted it was splendid”.

This dastardly act, which still brings a feeling of revulsion to every tourist that visits this monument, was enquired into by the Hunter judicial enquiry committee in October, 1919. It had five British members and three Indians, including the eminent jurist C.Setalvad. The Committee reported that 379 people were killed and up to 1200 wounded. Richard Attenborough’s famous biopic of Mahatma Gandhi has a highly emotive and largely fictional scene of the massacre. The reality is far more heart renting.

Perceval Spear, the historian, observes that “Jallianwala Bagh” was a scar drawn across Indo-British relationship deeper than any which had been inflicted since the mutiny of 1857. It became a remarkable signpost towards Indian Independence.” A reflection of what precipitated this massacre would be in order. Punjab in 1919 was a place of widespread agrarian unrest caused by monsoon failures, food scarcity and high prices, to which WW1 added its own pressure. The Rowlatt Act (1919) was a major petard to this, as it was carefully calibrated to punish the extremists while rewarding the moderates.                       .

On April 10th, a peaceful Gandhian Hartal turned violent with an angry mob rampaging through the city. The town hall was set on fire and its telegraph office looted. The National Bank and the Alliance Bank were also looted and the Managers set on fire. The most emotive attack was on Ms. Marcella Sherwood, the 45 year old Superintendent of the City Missions who was cycling into the city alone to close down the five schools she managed. She wanted hundreds of students in her charge to go home safely. She was stripped naked and mercilessly beaten by a group of men and left her where they thought she was dead. She was taken to the Fort where she hovered between life and death. One of Ms. Sherwood’s first visitor was Rex Dyer who had moved to Amritsar to help to restore order in the city.

On April 13th Dyer marched his troops with their armoured cars through the city prohibiting gathering of more than eight people. It is doubtful whether the ban was widely published. The Manual of Military Law required the   issue of a formal warning before opening fire on civilian rioters and the use of minimum force, if possible, only firing in the air. But Dyer conducted the shooting as a military operation against enemy troops, reasoning that he was the one under attack. During his prolonged examination by the Hunter Committee he said, that he would have probably used the machine guns, if he could have squeezed his armoured cars into the bagh! It was this unrepentant attitude that exasperated even Dyer’s firm supporter, Lt. Governor O’ Dyer who thought his assertions at the enquiry were ‘indefensible’. O’Dyer stopped the crawling order which was given by Brigadier-General Dyer for any Indian crossing the alleyway, where Ms. Sherwood had been brutally assaulted.

The British members in the Hunter Committee did not favour lack of notice and the length of firing. They thought it betrayed an error of judgement and overstepping of authority. They did not find any conspiracy to overthrow the British Rule and found him guilty of mistaken sense of duty. The minority view of M.C.Setalvad, Former-Attorney General of India was far more scathing. It referred to proclamation banning public meeting as insufficiently distributed. It found repugnant that innocent people, who were not indulging in any violence in the Bagh, were fired upon. They also found Dyer unfeeling, that the troops did not help the wounded to be taken to the Hospital. Dyer was completely unrepentant when he was asked about it. He said “it was not my job. Hospitals are open they could have gone there.”

Brigadier-General Dyer’s action came for discussion before the House of Commons on 8th July, 1920 where the resolution of censure was upheld by 230 – 179 votes. It was Churchill’s speech that tilted the scale against him when he said “it was a monstrous event, an event which stands in singular and sinister isolation”. On the other hand the House of Lords took a different view that the House of Commons was unjust to the Officer. The Morning Post launched a patriotic drive for funds for benefit of Dyer, portraying him as a victim. More than 26,000 pounds were raised. The butcher of Amritsar was given a full military funeral in 1927. Among the flowers was a wreath from Rudyard Kipling with a message “he did his duty as saw it”!

Kipling was not alone in this adulation. Three days after the massacre Dyer was invited to the Golden Temple and offered a Sharopa. A shrine was also built at another Sikh holy place, Guru Sat Sultani. Most of the Anglo-Indian Community saw him as the ‘saviour of Punjab’. On the nationalist side the Nobel Prize winner Rabindra Nath Tagore returned his knighthood in protest. Gandhi also returned the medals awarded for his war time services. The massacre had the unintended consequence of catapulting Gandhi to unrivalled leadership of the Congress, side lining moderates like C.R.Das and Moti Lal Nehru.

Amritsar’s tragedy of 1919 needs to be understood as the dying gasp of an imperialist ideology. There is a debate whether the massacre was the work of an isolated bigot or a reflection racism that one associates with imperialism. Quite clearly the second proposition does not stand vindicated. The Rowlatt Act was quietly repealed. The British never used fire power on the civilian mob thereafter; even at the height of partition riots in 1947.

A memorial was raised by Pandit Malaviya, Dr. Kitchlew and Mahatma Gandhi. Gandhi wrote in Young India: “The memory of the innocent dead shall be regarded as a sacred trust. And has not the blood of Mohammedan mixed with that of a Hindu. Has not the blood of Sikh mixed with a Sanatanist? The memorial is the national emblem of an honest effort to achieve Hindu Muslim Unity.”

The inclusive, plural spirit that Gandhi had hoped was shattered in to smithereens by Punjab’s partition.  Possibly the poignancy of the memorial has been captured best by the following lines

“Alas, this lovely garden is drenched in blood

This is a mourning place, so make no noise.”

The Making of a Manager