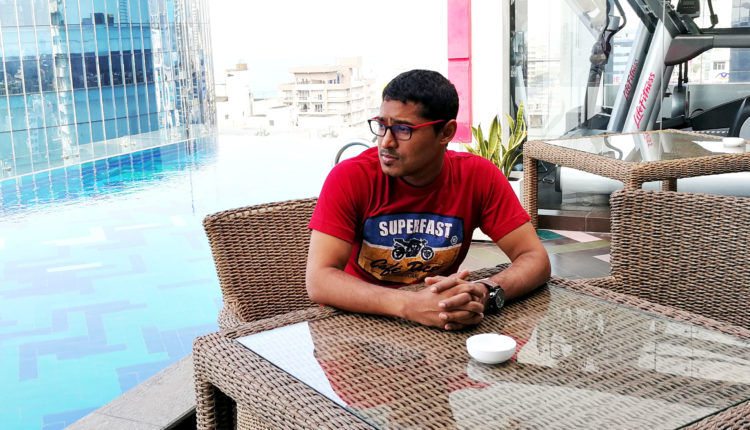 I remember my two plants in Pune which never came out of their owner-induced coma. The Gerbera only opened up its nursery-gifted buds and died right after I managed to sprinkle some water on its pink flowers and relished the clichéd shot of a greenhorn photographer. And the Monkey’s Puzzle, too small to trouble any of our forefathers, had its claws constantly turning brown one after the other, before the entire plant morphed into the sad mess of a puzzle!

I must be a bad copy of my father, I thought.

Baba had a way with plants. Like a creative chef who also arranged his craft well, one season he would make concentric circles, and the other, rectangles (his most debatable design was a closed semicircle, like the shape of a ‘D’ which ma had some serious trouble digesting). Every winter, our backyard (not the front as you might guess) filled with marigold, rose, zinnia, dahlia, calendula, dianthus, petunia and many more. For us, the ability to regurgitate these exotic names in front of the class mates was as much a matter of pride as the ownership of the plants themselves.

We saw him toil in his modest garden, carefully preparing the soil, tossing it up with his self-cooked compost and fertilizers, making little holes in the amorphous grey mix to bury the seeds in. Squatting beside him under a lukewarm sun casting golden shafts of light as fat as the gaps between the large, looming teak leaves, watching him go about doing everything methodically was our easiest family activity. Of course we contributed by watering the bed sometimes, and (if there was a charged-up ‘catch-me-if-you-can’ race with the cousins) trampling it too, even though the hardest slaps were reserved for rendering this particular type of service.

My love for plants, though it started with beating them with sticks and trampling, never died even under the suffocating weight of a software coolie’s job (as an engineering professor lovingly put it). So I tried my hand at a little garden of my own in the dreary city-concrete of Pune and Ahmedabad, only managing to produce stunted, stooping plants dying a slow, painful death. Sometimes I baked them in the sun, and sometimes made a soup of their soil, never really figuring what these little idiots wanted.

I rebooted my efforts after coming to Bhubaneswar, a city in Eastern India. However, I quickly — and utterly depressingly — realized that the flat I had booked with so much hope of a better life had its face permanently turned away from the sun. Nothing grew, except for the damned mealy bug, a soft-bodied parasite proliferating with an unknown vengeance.

I then started looking for plants that grew in the shade, but got repeatedly fooled by unscrupulous nursery owners, one of whom once tried passing off nothing less than a cactus as a shade-lover. So I began with a borrowed money plant (or pothos, now I know) and learnt by rotting and potting. Many died, some lived. Some grew wildly, some got crippled. And yet a few others froze in their first leaves. My desperate attempt at ‘shade flowers’ took me to orchids, an entirely different ball game.

What started with one, grew to ten, then to fifty, to a hundred and to over one hundred fifty now! So much so that little kids who came to play in our house have made a competition out of counting the pots. Before I realized, I had everything that my father had. Shovels, fertilizers, sprays, organic manure, a bunch of insecticides, neem oil, little packets of compost, mustard cakes and much more. It’s a humble collection; there is no garden, but it makes me happy. While parents think this is too much domestic responsibility for their ‘already troubled’ double-kidded-son, the wife, kind-hearted otherwise, now considers the entire house to have been taken over by this non-human species (and once went as far as calling their collective presence akin to that of a ‘souten’, a nomenclature Indian wives have historically reserved only for the most despised).

Some well-wishers have wrongly blamed the luxury of the obsession on my being a teacher, and yet some others have found the occasional water dripping from my balcony an invasion of their privacy and security.

The plants, however, have only grown. They surreptitiously encroach upon many things; the kitchen sill, the utility slab. The corridor, the clothesline. Some are gifted, some are plucked from the roadside. Some collected by the son who, at best, has a sinusoidal love for them. Some are even ripped from the barks of trees in jungles I made trips to. Few have now crossed the four walls of my house and found happy homes elsewhere. They have been carried in the train too, neatly packed and watered, by none other than my father.

‘They grow so well in your house,’ he tells me one day. ‘My leaves are not even half as green. Teach me what you do.’

I am suddenly speechless. He hands out my biggest reward and doesn’t even realize! I might one day get an award for gardening but that would be nothing compared to these lines from a man who has passed the love and appreciation of plants through his genes. So much love that I can’t reduce the number of pots in the house even if I want to.

Yes, I am more guilty than charged.

That Dark Cloud with the Silver Streak!