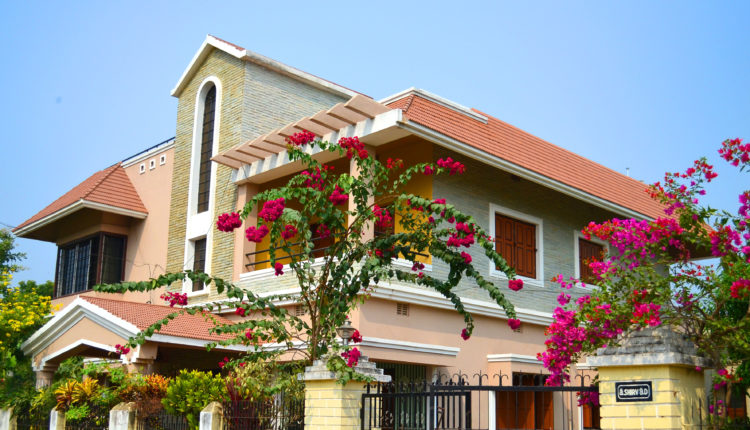 A House for Mr. Kar

On the first floor of my parent’s house is a locked room, beige on the outside and yellow-ochre inside. It’s unlocked only when we visit —  ma says she never lets anyone use the room, or its attached bath, even when the house is overflowing with guests.

The room, however, is unattached to our lives. No one has really lived in it, not even the kids. So it doesn’t lend itself to nostalgia, nor has any memory to pine for. The only exception is the air conditioner’s stabilizer that makes weird drumming sounds at night, which I am often reminded of whenever I switch on my own, back at home. The room is strangely sterile, not even smelling of the incarcerated mustiness of locked spaces that reminds you of the secret growing-up stories. Sitting like a sullen outsider in the south-west corner, it doesn’t belong to the rest of the house.

It isn’t home, though seem to forever intern to become one.

Because I raise two kids that are merely leased to me by their grandparents, our noisy arrival in the quiet lives of baba and ma — who keep their ears trained for the telltale rhythm of our car’s horn at the front gate, as if it’s one of the highest points of their existence— is always a much-awaited affair. However, in a house where love is sumptuously coated with complaints, our stay is always accused of being shorter. Shorter than the last time, we are reminded.

The visit follows a carefully rehearsed script. Before we arrive, both my parents postpone their knee pains and make multiple trips upstairs. Ma changes the bed sheet, dusts the room thoroughly, probably wiping and readjusting my glum marriage photograph inside a light blue wooden frame, painted with a solitary blue peacock— probably the only thing that reminds the room of its dwellers —on the shelf, fills a bottle of water for the side table and sends the hesitant maid upstairs to wipe the floor. Baba puts the batteries back in the AC’s remote and waves his hand under the fins to check for cooling, and inspects the faucets and water supply in the bathroom. Is the troubling Jaquar flushing properly? Does the Usha with a blown up indicator still dispatch warm water? My two sisters who stay not very far away ready themselves for a lunch or dinner invitation, agonising over the menu and excitedly looking forward to a grand family outing to the same unexciting destinations.

Because we spend most of our time downstairs anyway, using the room only for sleeping or the morning routine, I unpack almost everything in the living room itself, emptying suitcases and bags of fridge magnets preserved from a month-old trip, snacks and strawberries not available there, rasagullas from the way, unopened dry fruit gift boxes and old mobiles suitable for fathers. Occasional saris, t-shirts, dresses and fashion jewellery for the sisters. I then carry only the empty bags up (because of the space the room offers) to their empty destination.

This repeats over and over again, each visit more same as the above than the last.

The room, exactly as old as my marriage — it had been hastily completed to accommodate the privacy of a brand new daughter-in-law — isn’t stuffed like the rest of the house. There is no broomstick behind the door. The bare walls have no fish-shaped key-hanger, no dusty mirror applique work or framed embroidery of a teenage mother. The selves are empty except for the things we don’t need. There is no lacquer doll with a broken hand hidden behind a deodorant spray. No wooden pen stand packed with fallen buttons and safety pins and leaking Borolines. The dressing table mirror has no glue at the corner, nor the bathroom tiles have any bindi stuck to them.

The door knob is still profusely golden and the switches still click crisply even though we have been married for longer than life-imprisonment.

While the rest of the house under ma’s direct control has somewhat frozen in a timeless antiquity, this room has an air of fading modernity, even if awkwardly so, the consequence of being the design guinea pig of my then freshly-minted architect wife. The putty on the wall is smoother, the distemper shinier. The switches are thankfully modular with hidden screws, and the holders for light bulbs, designer. The small, light-green bathroom even has a lonely bathtub lined with border tiles inexplicably printed with an artwork of cows against the backdrop of a farm. Used only as an annual ritual, the bathtub — fitted crudely after a series of harried mistakes by novice workmen who hadn’t seen one in their lives — is the key reason the kids are always missing during lunch.

At the centre of the room is a geometric cot made from ply and veneer, with flat glass elements on the sides and drawers on every conceivable face. It’s a flawed, impractical design — every time we go to bed, we have to remember to put a few extra pillows on the sharp corners of the glass plates so that the kids who jump all over don’t fall and cut themselves grievously. The dressing table, designed with the same theme as the bed has a similar story (I often tell my wife that defective dowry is an indication of a near-perfect wife). As for the cupboard, it wears a laminate that had looked much better under the glare of showroom lights, but now looks like rotting wood extricated from the bottom of a pond.

But there is something good too, almost as a redemption for the talented architect. A bay window, nothing less,at the southwest corner, unheard of in the boxy neighbourhood. It’s a hanging window of sorts — designed to her remote instructions and emailed drawings, and by demolishing, much to my parent’s heartburn, the partially raised columns and walls — to sit at and enjoy the adolescent summer breeze or the red sun dipping behind tall shafts of bamboo beside a brick-red DAV school building.

Clearly visible from the road, the jutting mass of the window along with its triple cornice and dark glass panels— the rest of the house has only brown, old-fashioned wooden shutters — looks more alien than the room itself. It is the single biggest pride of my parents, who, assured that no one in a ten-kilometre radius has such a historic innovation, have been only too happy to convert all visitors into helpless tourists, showing them enthusiastically around the architectural marvel. Though my mother aptly, even if jokingly, calls her a ghara bhangi, a breaker of houses, she has fallen so much in love with her daughter-in-law that it isn’t entirely preposterous to call the humble (okay, not really!) window the guardian angel of our marriage, keeping all manner of in-law-bred problems at bay.

The house has a name, ‘Ashirvad’, which means blessing, decided much before we could afford a piece of land near the city. The engraved granite affixed to the pillar of the gate is relatively new though. ‘It’s the name of Rajesh Khanna’s too,’ ma had said ‘that’s why’ — referring with an odd blush to the famous bungalow of her teenage heartthrob. While studying engineering, I had filled the back pages of countless diaries gifted by people who didn’t need them with sketches of our dream house. I was no designer, and least of all, an architect. However, every time I saw something impressive from the backseat of baba’s sea-green LML Vespa, I stole a prominent design element and mentally put that up on the house I was already building in my heart. So crazy I was about it that I had wanted our nameplate to stand out too, convincing baba to make one with both the A’s of ‘Ashirvad’ in small letters with accents on top to signify the long sound while rest were in capitals. When my parents could no longer take the adverse comments of their neighbours about their otherwise decent son’s odd inventiveness, they replaced it with another where all the letters were in plain capitals, without any creative mischief.

It’s only an uncanny twist of fate that every time I snatch the kids from their grandparents and pour them into the car, and look back for one last time at my silently weeping parents standing near the gate as the vehicle jumps on to the main road, the bay window, as also the room, comes straight in the line of sight, framed by arching branches of bougainvillea and an erect areca nut. My parents always stand between us and the room, in the very last moments of our sojourns, as if they were mediators in a frozen relationship. As if we need to visit more often, to make the room our own, our home.

It never happens. The grey, stone-clad house with sloping, tiled roof, half-drowned in baba’s garden, stands only a mute spectator to the breaking of hearts. My elder sister, post her marriage, was the first to call it ‘father’s house’ instead of ‘our house’, which I had vehemently opposed then. But as a mossy-yellow building wipes baba and ma’s devastated faces off my sight and I finally pull my own window up, the inevitable reality of not having them around for long hits me like a slap. And the fact that one day, this entire house will become like that room. Only a house, not a home anymore, the memories hung on its walls notwithstanding.

A mere anticipation sometimes shatters you more than the event itself. Unknown to the people inside the car, my jaw vibrates briefly, and a thin stream of water rises up to eye, never spilling out, as if someone turned the tap off before the hose spat out. Through a gap between buildings, I catch a glimpse of the top-floor room for one last time. It looks back at me, not like a forlorn lover, but only an aloof acquaintance.

That Dark Cloud with the Silver Streak!

Revival of Economic Activities after Gradual Relaxation Under the Lockdown: Concern of our Economic Warriors