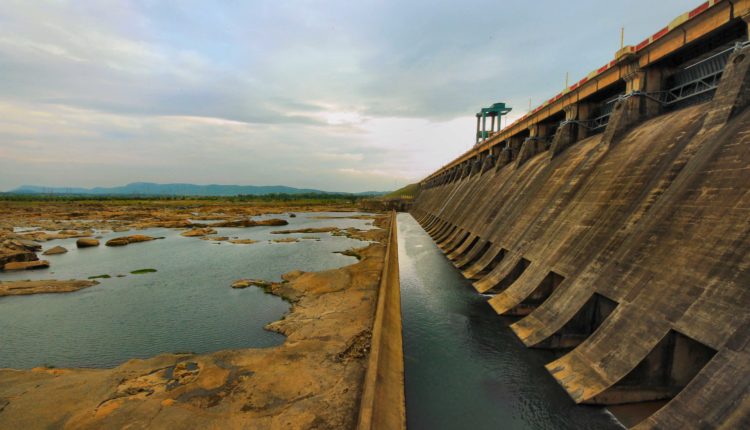 Sometimes the history, legend and folklore associated with a structure are far more intriguing and absorbing than the edifice itself. Such associated stories make the trip to such famous places even more alluring. Situated in Sambalpur district in western Odisha, the longest earthen dam in the world, Hirakud, is one such major river valley project in the state which has many untold stories concealed in its huge reservoir, excerpts of which can be still be seen at various points in the basin once the water level comes down.

Odisha despite having an abundance of land, water, minerals and man power was suffering from abject poverty and chronic diseases, the state’s Achilles Heel being unabated floods and widespread periods of drought. In June, 1947, Dr. A.N Khosla, Chairman, Central Waterways Irrigation and Navigation Commission, Government of India, in his report proposed a scheme for unified development of the Mahanadi valley which comprised of 3 projects : The Hirakud Dam Project, The Tikarpada Dam Project and The Naraj Dam Project. The project was designed to utilize the water of Mahanadi for the purpose of irrigation, hydro power generation, flood control in the delta areas and soil conservation.

Built at a cost of more than 100 crores, this was the first major river valley project undertaken by the Government post-independence. It was formally inaugurated by Pandit Jawahar Lal Nehru in 1957. A composite structure of earth, concrete and masonry, the main Dam is 4.8 kms long between the two hills of Lamdungri and Chamudungri. Flanked by 21 kms long earthen dykes to close the low saddles beyond the abutment hills, it earns the remarkable distinction of being responsible for the largest artificial lake in the world spread over a whopping area of 743 sq.km. The dam along with the extensive dykes makes it the longest man-made dam in the world.

The Hirakud dam project apart from providing irrigation to the districts of Sambalpur, Bargarh, Bolangir and Subarnapur also ensures perennial water supply to 2,51,000 Ha of cultivable land in the Mahanadi delta. It also provides flood protection to 9500 sq.km of delta area in the districts of Cuttack and Puri. The dam which was supposed to provide livelihood and prosperity to almost one third population of the state was also the reason for grief, despair and anguish for close to 10000 displaced families whose generations old land and houses met a watery grave. Almost 249 villages were submerged due to the Hirakud reservoir. More than hundred temples also went beneath it. Like in most Bollywood horror movies, the dead eventually makes their way back to the living world to tell the gruesome story of their death, many such temple structures stick their heads out from their watery grave trying to remind the world of their existence and past glory.

The World at your Feet

Two minars have been built by the state government on either side of the dam on top of the two hills. The structures which are named after the two great leaders of India – Gandhi Minar and Nehru Minar, provide a 360 degree expansive view of the massive reservoir and the dam. The hills on either side of the dam seem like miniature dunes in front of the humongous water body which looks vaster than the sky above. The road on top of the dam looks like a newly constructed runway for arrival of a jumbo jet. Standing on top of the minar and watching the mighty Mahanadi river reduced to trickles on the other side of the dam, one can’t help but marvel at the engineering spectacle. While exploring the dam site, one might feel at the mercy of the vast expanse of water, but somewhere inside it will feel as if something big has been conquered.

Visit Hirakud to admire the unhindered vista of the great Mahanadi river and adjoining plains, to witness the longest man-made dam in the world and to discover many poignant untold stories of the world which is now buried under the reservoir.

Getting There: Sambalpur is well connected to the state capital by through road and rail

Transport: It is preferable to book a private transport (auto/cab) from Sambalpur